Applus+ Norcontrol has received the support and funding of the Spanish Ministry of Industry, Commerce and Tourism as part of the programme to support the AEI (Innovative Company Groups), contributing to improving the competitiveness of the Spanish industry.

Critical infrastructures are the structures designed to provide key and essential services. The alteration or interruption of these services can have potentially catastrophic consequences, which can also occur during the construction stages of the infrastructure.

Nowadays it is critical to control the state of every civilian infrastructure and industrial facility, and incorporate to the process all the data gathered, helping digitise the content. Although there are increasingly more digitally-monitored operating and engineering practices, there are many assets in these industries that are still controlled manually and in old-fashioned ways, in spite of the critical nature of some of these structures. This is the case of storage tanks commonly used in chemical plants, petrochemical plants and refineries. In addition, measuring strains of pipelines and conduits has a very low efficiency, as well as monitoring strains during the construction stage of buried structures.

In this context, the Shape Sensing project has been introduced so that it is possible to monitor the changes produced in the geometry of any element, anticipating structural flaws and thus minimising the consequences and risks associated with these flaws. The system aspires to create a tool supporting the life cycle of elements that is aimed at controlling their structural integrity, contributing to the concept of intelligent asset by means of digital twin technology.

This project, which began in April 2021 and ended in March 2022, was led by the Southern European Cluster in Photonics & Optics (SECPHO) and included the participation of Applus+ Norcontrol S.L.U. and Cálculo y Estructuras Sensadas S.L. (CALSENS) as members of the consortium.

Shape Sensing aims to develop a shape sensor based on FBG technology (Fibre Bragg Gratings) that makes it possible to obtain data continuously and in real time about the strains of elements with a length between centimetres and hundreds of metres.

The system is based on the concept that light travelling through FBGs is partially reflected due to the modulation of the refractive index. The light reflected interferes constructively with a specific wavelength called the Bragg wavelength (λB) and propagates backwards on the core of the fibre (figure 1b). 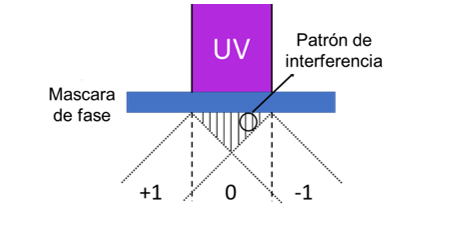 Figure 1. (a) An ultraviolet light shines on a phase mask. The two orders of diffraction (+1 and -1) generate an interference pattern. The core of the fibre is exposed to the interference pattern to create an FBG. (b) Schematic representation of the FBG as a fluctuation of the refractive index on the core of the fibre. The input light is reflected on the Bragg λB wavelength.

Single board interrogators are used to detect the peaks of the wavelength in order to discover the variations of the strain, which can be integrated with the monitoring system of the element potentially monitored.

Once the data is obtained, the shape is determined by software implemented in Python. The various functions implemented are used for the following: